What are the benefits of having a tonsillectomy?
Tonsils are usually removed because they are causing problems-
• Repeated (recurring) attacks of infection of the tonsils (tonsillitis). If you have bouts of tonsillitis which are frequent or severe, having your tonsils removed stops this happening. However, it does not stop you having sore throats and other throat infections.
• Recurring abscesses around the tonsil (called quinsy).
• Tonsils (and/or adenoids) are getting in the way of the airway, making it difficult to breathe, sleep or eat. For example if you have a condition called obstructive sleep apnoea, removing tonsils and adenoids may be helpful.
• Growths on the tonsil that need further investigation.

What are the risks of having a tonsillectomy?
Tonsillectomy is a common operation which usually is very safe. However, ALL operations do have some risks. Problems or complications may occur in some cases-
• Risk from the anaesthetic. Being put to sleep (a general anaesthetic) is needed for a tonsillectomy. There is always a very small risk of problems during anaesthesia.
• Bleeding. Any operation where tissues are removed will cause some bleeding. This is stopped at the time of the operation but, occasionally, bleeding may restart in the hours or days afterwards. Sometimes this can be heavy bleeding which needs a further operation to get the bleeding under control.
• Infection. The healing area in the throat is raw and prone to infection after the operation. To help prevent this, antibiotics will often be given around the time of the operation.
• Pain. You can expect some pain for one or two weeks after a tonsillectomy. In some people this can be severe. You will normally be prescribed painkillers to take after the operation and when you go home.
• Damage to the teeth or jaw. Occasionally teeth may be damaged accidentally during the operation, as all the surgical instruments will be in the mouth very close by. It is important to let the doctor doing the anaesthetic (the anaesthetist) know if you have any crowns, caps or loose teeth. In some cases there may be pain in the jaw following it being stretched open during the operation.

What happens before the operation? You (or your child) will not be able to eat or drink before the operation. You will be told by your hospital exactly when you should "starve" from; however, it is normally from about six hours before the time of the operation. The operation itself usually takes around an hour. While you are deeply asleep under a general anaesthetic, the tonsils are removed. This operation can be done in several ways. These include:
• Cold steel surgery. This is the most common method. The tonsils are physically cut out with a surgical knife.
• Coblation (radiofrequency ablation). -heat probe called a coablator is applied to the tonsils. This destroys the tissue and seals the blood vessels to stop the bleeding. 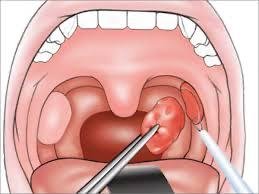 What happens after the operation? You will be discharged around day or two after surgery and will be adviced oral antibiotics, analgesics and gargles Pain relief. It is normal to have a very sore throat after a tonsillectomy. Pain may also be felt in the ear due to the way the nerves are connected. Take regular painkillers until the pain starts to ease. Painkillers will probably be needed for one to two weeks.
Eating and drinking
You (or your child) can start to eat and drink normally as soon as you feel able after the operation. Usually started with cold liquids/fluids like milk shake, ice cream. Any spicy or citrus food is avoided for around a week. Brushing teeth.
Brush your teeth as usual, as it helps to keep the mouth free from germs. It also freshens the mouth. Also you will be given gargles for regular use for about 2 weeks after the surgery Going back to work/school.
Normally you will be off work for 5-7 days after a tonsillectomy. 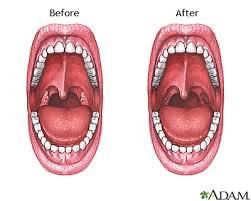 Unlike traditional tonsillectomy procedures, which remove tonsils by burning, Coblation is an advanced technology that combines gentle radiofrequency energy with natural saline —to quickly, and safely remove tonsils. Because traditional procedures use high levels of heat to remove the tonsils, damage to surrounding healthy tissue is common. Coblation does not remove the tonsils by heating or burning, leaving the healthy tissue surrounding the tonsils intact. The innovative approach of Coblation results in minimal pain and rapid recovery for patients. 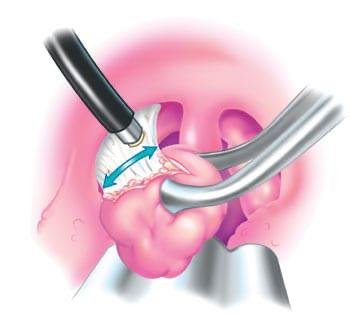